Earlier this month I had the privilege of working for Black Magic Design as a demo artist for DaVinci Resolve 12 during NAB.  This was my second time around working as a demo artist for them and it was just as crazy as the first.  Long days, lots of networking, and cramming my head full of new features made the days fly by.  But it’s a great experience and a fantastic way to learn the new software from the people who design it.

As with Resolve 11, there were some new creative features that really stuck out to me in this new release.  I will surely use these features in July when the new version comes out.  Please forgive the cell phone photos that I snapped quickly before the mad dash of opening day. 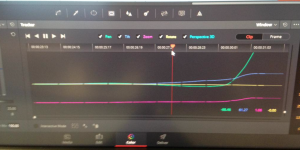 While the tracker in Resolve 11 was already very strong, this new option has taken it to another level.  Like the PTZR controls, you can choose which functions you’d like to have active for the track.  Sometimes you’ll need it, sometimes you won’t.  I found it very useful and working well with shapes that were partially obscured or moving off screen.  Also in addition to the Perspective 3D tracker the frame option for manually moving shapes and rotoscoping is much improved.  I find it way more intuitive. 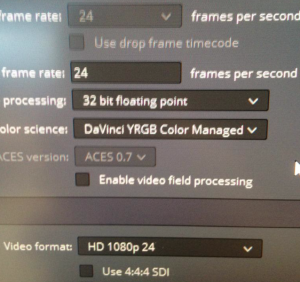 This was kind of a weird feature to demo since it doesn’t really show the power of this new color science implemented by the BMD team, but for some this will be a serious game changer.  Basically you can choose an input, timeline, or output colorspace.  Depending on your source footage you can put all formats into the same colorspace.  So, for example, if you have LogC, Rec709, and other starting points from difference cameras, you can place them all in the same world.  I’m thinking of it as a non-destructive LUT.  This will save tons of time for colorists and instead of having to balance out all the different colorspaces, most of that work will have already been done.

In addition to the HSL, RGB, and Luminance qualifiers, Resolve 12 now has a 3D Qualifier.  I should say from the start that this is not meant to replace any of the other qualifiers, it’s meant to work as another tool to improve your color grading.  From the footage that I worked with I found that it was fantastic on green and blue screen footage.  Combined with the new despill feature it was quite powerful.  There are also some new cleanup functions that really help nail down the perfect key.  Pulling keys on skin tones also seemed to be strong point for the 3D qualifier.  Every color selection that you make gives you the RGB values of that color and allows you to view the swatch and delete that layer if you’d like to start over.  I also found that you generally want to do no more than three selections.  Any more than that and your edges get too sharp.  Most likely you could get a better key with a different type of qualifier.

In conjunction with the 3D qualifier this new feature gives a lot of control to finessing mattes.  By creating an additional corrector node and an alpha output you can now attach the alpha channel to the RGB to work on getting the ideal matte.  This should really help you nail down the perfect matte that you might not have been able to get with previous versions of Resolve.  My hope is to create better mattes on my own and not have to go to my support team to cut mattes for me.  The quicker and more accurately I can work, the better.

I have been waiting for this feature since Resolve 9.  It’s simple, but it will save me a ton of headaches.  I use lots of circular power windows.  I go to them before anything else.  Hell, I still use them for skies instead of the sky gradient out of habit.  A lot of times they’ll get me exactly where I want to be, but every now and again, they just don’t cut it.  Now I can instantly convert them to a bezier window and the circle shape shifts to a custom shape.  Points can be added and tweaked as you need to create the perfect shape.  Incredibly handy.

I’m sure as I work more with these new features and implement them on actual jobs my opinions will change.  I know that some of the features I thought would be lifesavers in Resolve 11 I don’t use nearly as much as I thought I would.  Either way, it’s exciting to see the development team working hard to give colorists new tools to create better work more efficiently and creatively.