The Grading Style of “American Gods”

I recently started watching American Gods on Starz and have really been enjoying it.  I loved the book and was curious to see how it would adapt to television.  Some of the subject matters are rather bizarre and pretty far out there, but the show has managed to pull it off quite well.  If you aren’t familiar with the show take a peek at the trailer below and you’ll see what I mean.

From looking at the trailer, it’s obvious that visual effects play a large role in the series.  But so does the color.  Integrating the two in a manner that better tells the story is the key.  The first season is eight episodes long and shot on Alexa by three different cinematographers: Darran Tiernan, Jo Willems, and Aaron Morton.  All eight episodes were beautifully colored by Dave Hussey at Company 3.

Throughout the season there are several different characters that take the spotlight.  Each character has their own unique look and feel – especially when in their “god-like” state.  Take for example Bilquis.  She is a succubus-like goddess of love.  The color most commonly associated with love is red.  However, she’s not exactly portraying the good type of love.  More of a worship/obsessive type love.  There is a mysterious sense of evil surrounding her that is also conveyed with the color red.  So there is an interesting dichotomy at play with the two conflicting genres – love and evil. 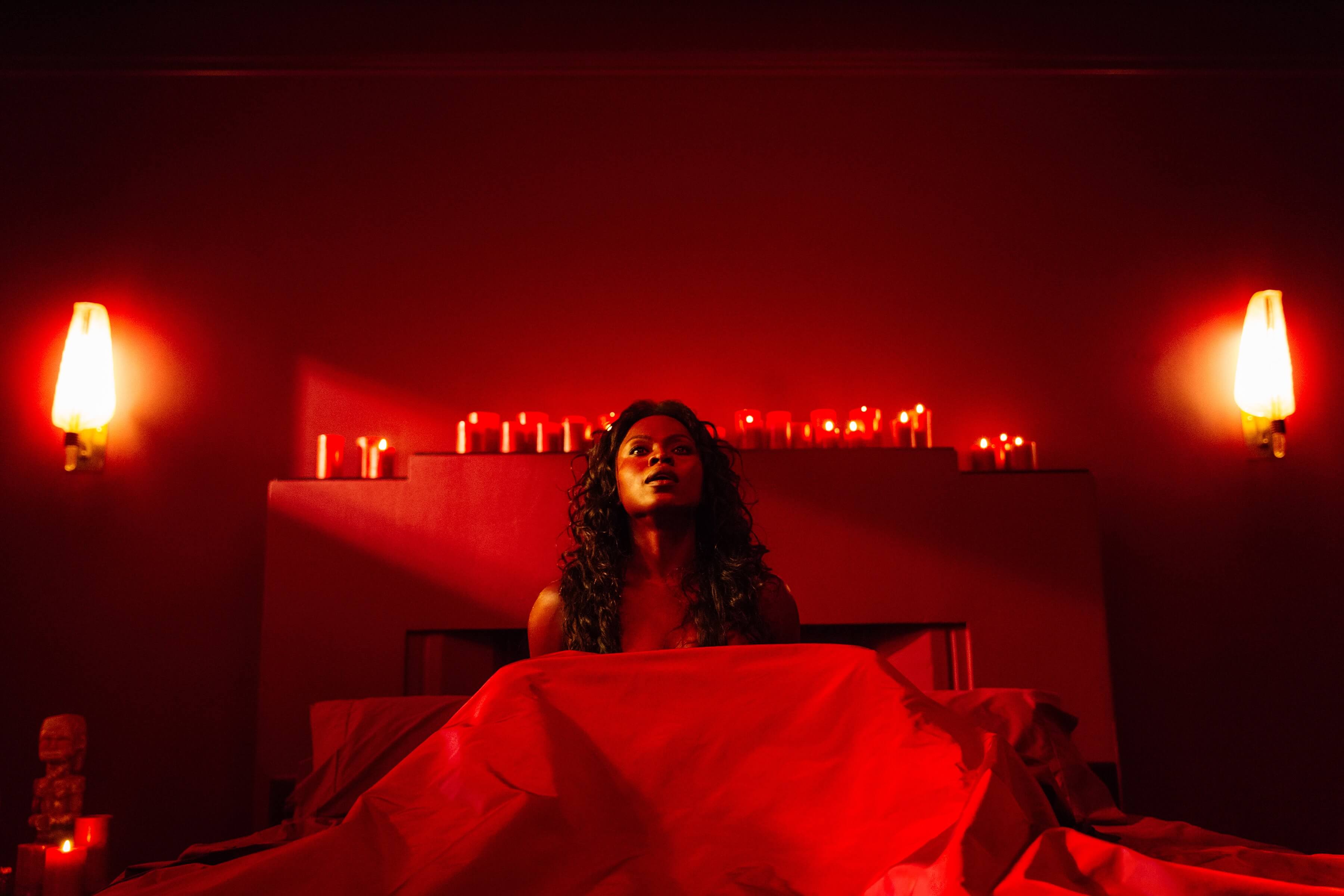 A lot of her scenes are accentuated with lighting and production design, but I have to imagine they were particularly difficult to color when analyzing skin tones since we rarely see people in such dramatic conditions.  The image above is one of the more extreme examples, but in general when highlighting Bilquis there is a dominant shift towards red.  In a lot of her scenes the image is flooded with red, so you pretty much have to go with what just feels right for the scene.  There is really no “right” answer for the color in these type of images.  Just what helps progress the story and develop her character.

Another example of a character that has a unique look, although not quite as extreme, is Technical Boy.  His environments are clean, stark, and void of any rich/lush color.  Aside from parts of his wardrobe (which helps provide a pop of color contrast against the dull environment) everything is quite monochromatic.  This helps create a sterile world where technology thrives with no sign of organic life.  As the new gods prepare to battle the old gods (the underlying theme for the entire show) we see an interesting contrast between the two sides.  Maintaining these neutral color values can be difficult from a colorists perspective since the slightest shift in red, green, or blue can tint the neutral colors and throw off the balance.  Keeping the color stale on the new gods, specifically Technical Boy, directly plays against the deep, rich colors that make up the old gods.  Shiny and new vs. old and weathered.  It’s really quite clever. 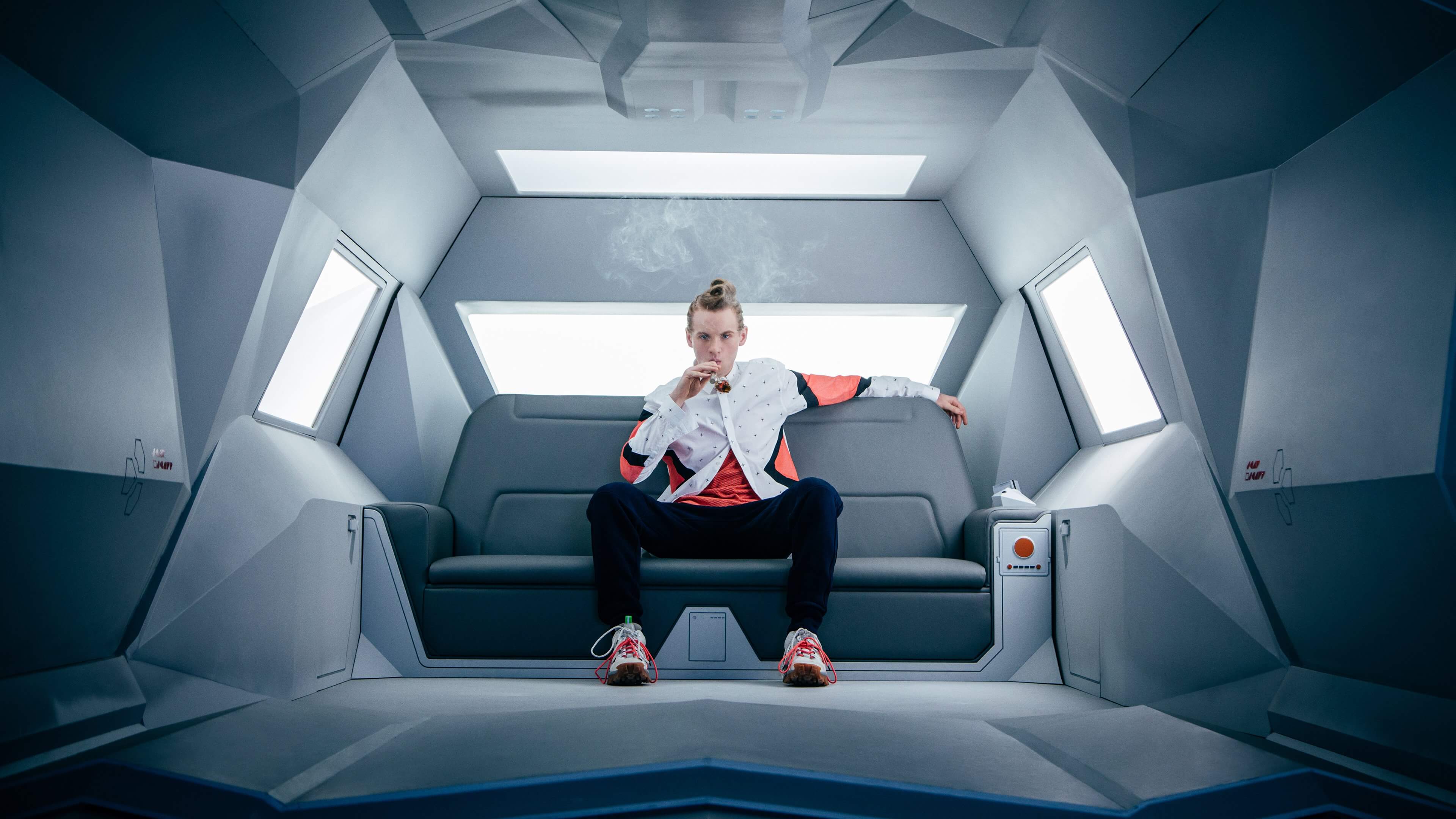 As for the main character, Shadow Moon, we see him in a more normal world for the most part (at least in the beginning of the season).  The general feel of his grades are a little desaturated with lots of selective sharpening.  My first impression was that the series was shot on Alexa, but after seeing how sharp some of the images were (as a creative decision, not in terms of technical sharpness) I had my doubts.  I was able to confirm with Dave (the colorist) that the series was primarily shot on Alexa.  Darker skin tones like Shadow’s can be particularly difficult.  Balancing between magenta and green in always a challenge.  But with some saturation taken out there is a little more wiggle room for mistakes.  It looks like Dave nailed the sweet spot on this one and has a nice, consistent look throughout all of Shadow’s “real world” scenes. 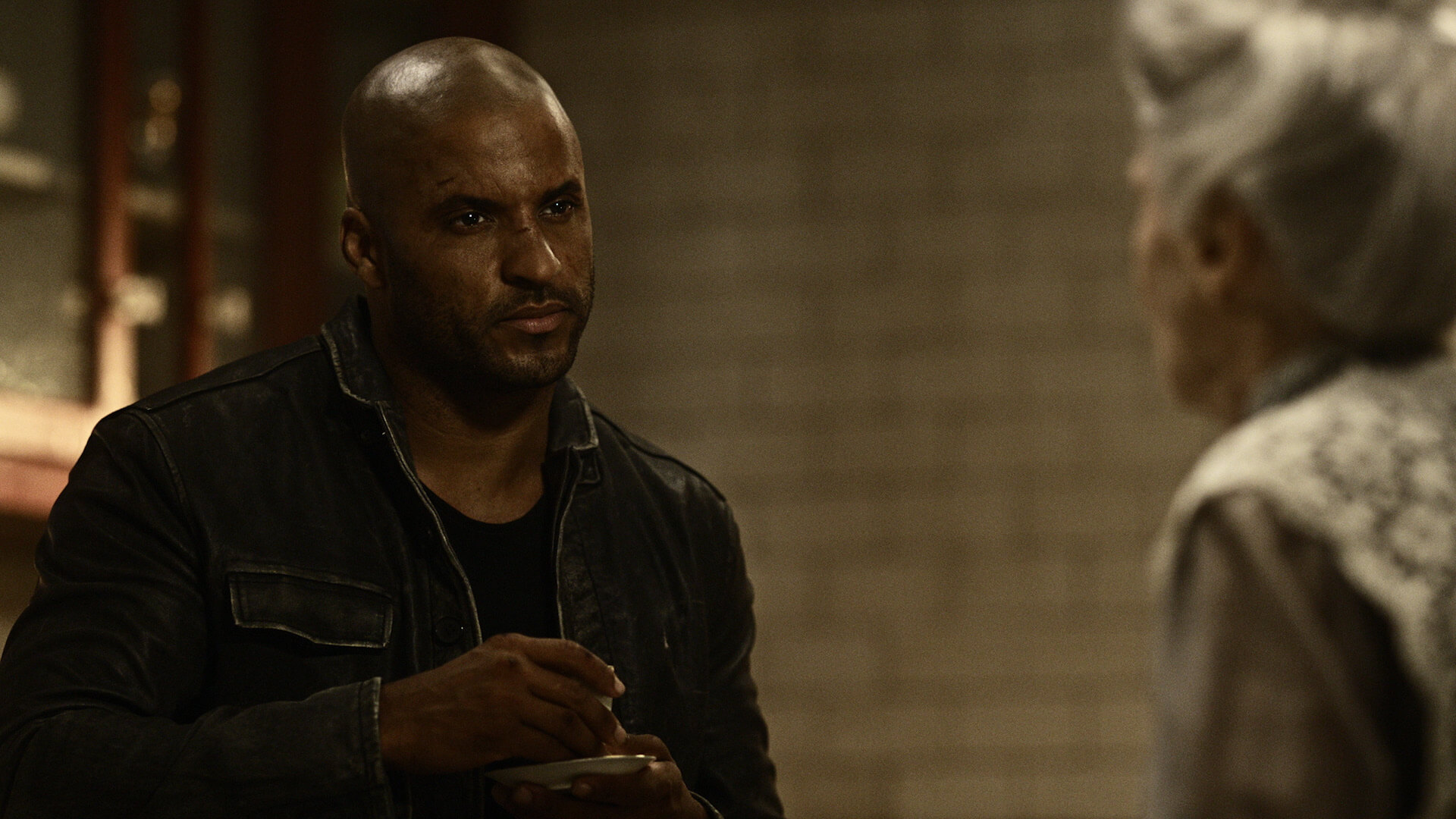 For me, in terms of color, the look of American Gods is all about contrast.  It’s heavy.  Really heavy.  Lots of deep, deep blacks paired with some nice highlights that really pop.  Those combined with sharpening and some slight desaturation make for a very gritty piece.  It’s aggressive, and I like it.  The subject matter and imagery is abstract and the grade goes along with it.  It’s nice to see a show that’s not afraid to push the envelope and take the image a little further than the audience is used to.